Review For: The Christmas Cowboy Hero by Donna Grant 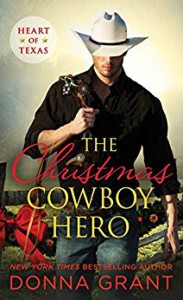 The Christmas Cowboy Hero by Donna Grant is the First book in a new series called "Heart of Texas". This is the story of Clayton East and Abby Harper.
Abby has been taking care of her younger brothers for a long time but had to look after them full time after their mother just up and left them. So while trying to keep up with her brothers she is also trying to put food on the table and finish her college degree.
Clayton feels the lost of his brother very strongly and with that he hasn't wanted to return home to the family ranch. So after leaving the Navy Seals he went about finding other jobs to do..but that has come to an end now. Clayton's father has fallen sick and they need him back at the ranch. There Clayton learns that someone has been taking their cows and that the ranch is in bad shape. Clayton tries to do what is right but he is fighting his feelings each day until he meets Abby.
Abby's brother was caught trying to steal East Ranch cattle and now he is in trouble. Clayton offers to have the boy work of his debit by working at the ranch. Clayton also thinks he can get the boy to talk to find out who is really behind these thefts. Also it will lead him to be closer to Abby who has giving him something to look forward too.
https://twitter.com/soapsrus68
https://www.facebook.com/RomanceBookReview
http://booklikes.com/blog
https://romancebookreviewforyou.wordpress.com/
https://www.tumblr.com/blog/romancebookreviewforyoublog