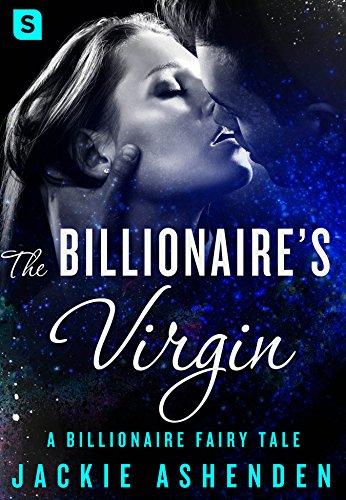 Book #1 in the intensely sexy Billionaire Fairytales by Jackie Ashenden where sometimes dark and tortured, sometimes bad boy and charming, but always dominant and sexy billionaires steal their heroines' breath away.

Xavier De Santis: Charming. Disgraced. Playboy.
The headlines are always shouting about the excesses of the so-called Prince Charming of the De Santis family. Problem is, Xavier is everything they say he is.
But now he’s gone too far, and he has has been ordered to clean up his image. Volunteering at a homeless shelter, Xavier sees a bright light amidst all the bleakness. An angel whose luminous face and tragic beauty call to him in ways he can’t explain.

Mia: Homeless. Vulnerable. Virgin.
When the shelter Mia calls home closes, she is left with nowhere to go. Nowhere except the luxurious, glorious palace of a home where Xavier De Santis has invited her to stay. This too-handsome billionaire is dark, dangerous…and also too good to be true. Surely Mia can indulge in her fantasies and escape the hardness of her daily life for just one night?

As one night turns into two, Mia knows that eventually, the magic will end. She can't keep the beautiful clothes. She can't keep the soft bed. And most of all, she can't keep the hard, handsome man who makes her crave his touch with every breath she takes.
Mia doesn't belong in his world. But as Xavier tempts his rags-to-riches heroine with exquisite pleasure and heady desire, Mia may have no choice but to surrender to him completely.

AUTHOR BIO: Jackie Ashenden lives in Auckland, New Zealand with her husband, the inimitable Dr. Jax, and their two kids and two cats. When she’s not torturing alpha males and their stroppy heroines, she can be found drinking chocolate martinis, reading anything she can lay her hands on, posting random crap on her blog, or being forced to go mountain biking with her husband.
Jackie writes dark, sexy contemporary romance for St Martin’s Press, the titles Mine To Take, Make You Mine, and You Are Mine.

“No.” The word was breathless, her gaze meeting his, wide and dark. She looked surprised, as if she hadn’t been expecting to say it either.

“No?” He found he was almost holding his breath. “No, what?”

“I don’t…I can’t….” She stopped, looking away yet again, her mouth firming.

His patience was hanging by a thread. He was either going to have to get up and leave himself or… Well, shit, he didn’t know what else. Maybe go and get some relief in the shower or something.

“I don’t want to do anything you don’t want,” he said roughly. “So you’d better tell me what it is you do want, sweet thing.”

“I don’t know.” She sounded desperately unsure of herself. “I’ve…never done this before.”

“Sex you mean?” Because he had to get this straight for both of them.

“Yes.” She ducked her head, her shoulders hunching. Which had the unfortunate - well, unfortunate in terms of his restraint - effect of widening the gap in her shirt, giving him a glimpse of the soft curves of her tits and a flash of small, pink nipples.

He dug the fingers of his other hand into the arm of the couch, not giving a shit about the leather. “So…you’re a virgin?”

“But you know how it all works, don’t you?” A perfectly valid question when he didn’t know what her old bitch of a grandmother had told her. If she’d told her anything at all.

Her head came up at that, annoyance glittering in her eyes. “Of course I do, I’m not stupid.”

He held her gaze. “I didn’t say you were. But I need to know you understand what I want.”

“I know. Believe me, I know. I see it all the time on the streets.”

Xavier let out a breath, a cold ripple of understanding washing over him. Jesus, and he could imagine what she’d seen. Prostitutes probably, and sexual assault. Sex as a transaction, as a show of power.  Nothing good. Nothing pleasurable.

“What I want from you,” he said carefully, “is not in any way what you’ve seen on the streets. Do you understand? It’s about pleasure. For both of us.”

Another flicker in her eyes. “Well, yeah. Of course.”

She looked abruptly down at her hands again. “I mean… the guys seem to like it.”

And the women didn’t, clearly.

Xavier shifted, turning fully to face her, because if she thought he was going to be one of those assholes on the street, who forced women, who wanted to show off their power by hurting them, or who were just after a fuck for their own selfish reasons, then she was mistaken.

Yes, he wanted her, and maybe by chasing her, it meant he was selfish too, but he didn’t want this only for himself. He wanted this for her as well. He wanted to make her feel good, wanted to cancel out whatever she’d seen on the streets of sex and show her what it was really like.

She shook her head.

He reached out again, gripping her chin firmly and lifting her head up so she had no choice but to meet his gaze. There was confusion in her eyes, and fear, all the same emotions that had been there when he’d kissed her the day before. And desire too. But did she even recognize that? Had she ever felt it before with anyone? If not, then no damn wonder she was so confused.

“The kind of sex I want is about pleasure. For me, sure. But mainly, I want to show you how good it can be for you.” Her skin was so soft against his fingers and he wanted to stroke her, but this was important so he kept still. “Do you want that? Would you like me to show you how good I can make you feel?”

She stared back at him and he could feel the tension in her jaw. “I kind of do,” she said huskily after a moment. “But…I’m afraid.”

Her throat moved as she swallowed. “Like…I want something.”

This time he couldn’t stop himself, stroking along her jaw with his thumb. “And what you do want, sweet thing?”

Her eyes were very dark. “I think…I want you.”

A deep sense of satisfaction moved through him, along with a sharp triumph that made him want to push her down and give her what she wanted immediately.

But no. He wasn’t going to do that. He needed to be slow, be careful.

Being with someone who was afraid of their own desires was new to him, and he had no experience to guide him. Normally he just made stuff up as he went along using trial and error, but with Mia… Jesus, he couldn’t afford an error.

Already this thing with her was far more complicated than anything else he’d had with other women, and that alone should have made him pull back. Complicated was definitely not what he was after.

Yet… She wanted him. And he was desperate to give her what she wanted.

He stared at her, keeping his grip on her chin firm. “Then you can have me.

“You don’t have to do anything. Just keep looking at me and let me do the work.” God, he couldn’t wait.  He would show her everything.

Reading out, he flicked open the second button on her shirt.

She tensed, but didn’t pull away, so he kept going, tugging open the fabric. The two halves of the cotton gaped and she shivered.

“Are you okay?” He watched her face carefully.

She gave a little nod, trembling as he reached for the third button and undid it, the fabric gaping even further, revealing those pretty, perfectly round tits. He let himself look as he pulled open the rest of the buttons, measuring the tension in her by the taut feel of her chin in his hand.

Christ. A flush had spread down over her chest, her nipples tight and hard. His cock ached, impatient as always, but somehow knowing that he was in charge of what happened here, that he was responsible for her pleasure made everything easier to deal with.

He was not going to fuck this one up.

Sweeping his gaze back to her face, he made sure she was looking at him, as he reached out once more, resting his fingers once again on her throat, letting her get used to his touch. Before easing them down, sliding lightly over her chest, tracing little patterns on her skin.

Her breathing had changed, becoming faster, ragged sounding in the silence of the room. There was a darkness in her eyes, the same kind of darkness he’d seen in them when he’d kissed her, her pupils dilated, an almost glazed look in them.

“Does this feel good, Mia?”  He followed the curve of one breast with his fingertip. “It’s okay if it does. You’re allowed to have it. This is yours, it can’t be taken away.” His fingertip reached her nipple then circled around it a couple of times before gently brushing over it. “You know that, right?”

She shuddered, a sound escaping her throat, something small and glistening running down the side of her nose.

“No,” she whispered hoarsely.

Copyright © 2017 by Jackie Ashenden and reprinted by permission of Swerve.