ONE NIGHT OF PASSION by Erica Ridley

One Night of Passion, the next standalone in the all-new historical and romantic The Wicked Dukes Club Series from New York Times bestselling author Erica Ridley is available now! 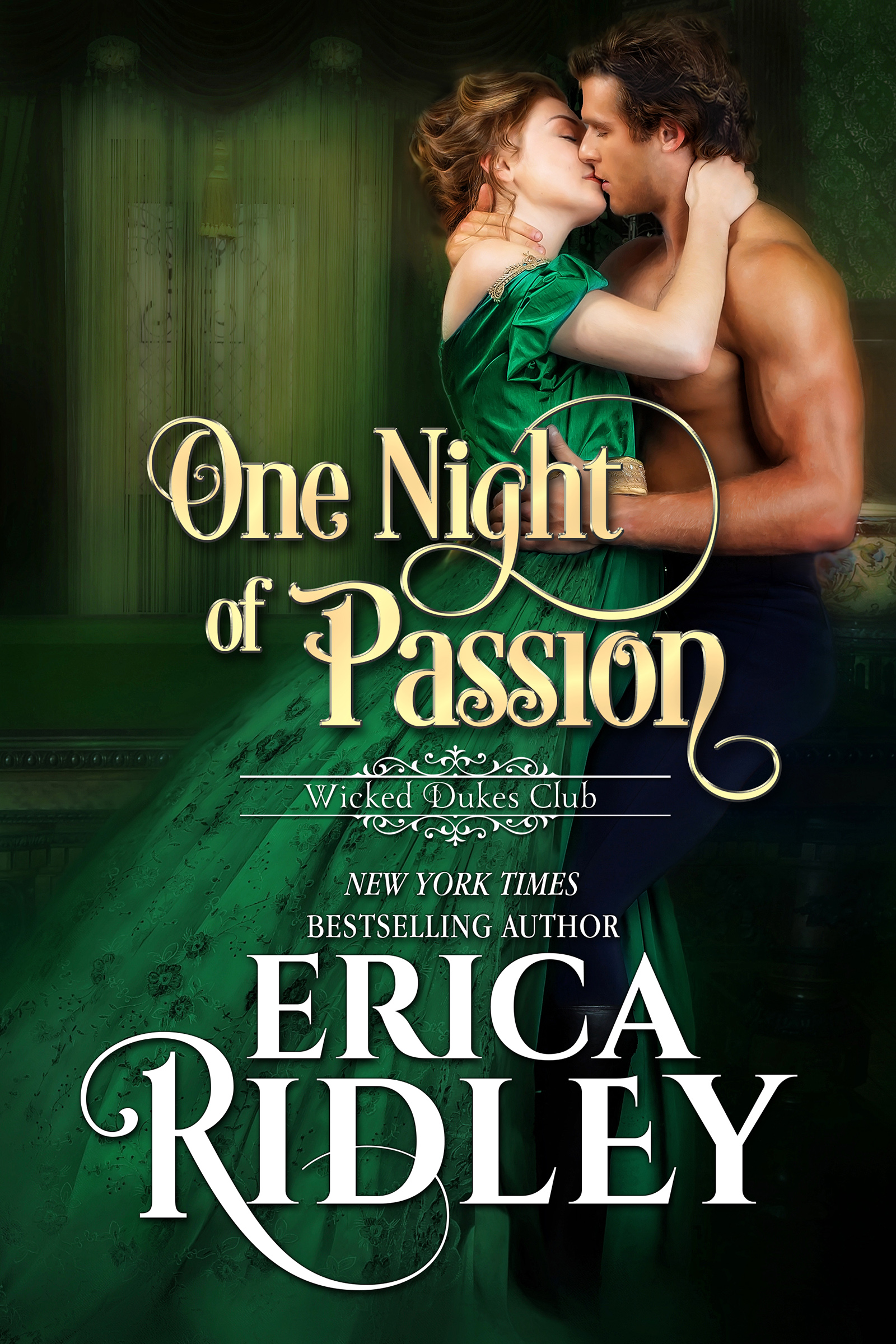 Meet the unforgettable men of London's most notorious tavern, The Wicked Duke. Seductively handsome, with charm and wit to spare, one night with these rakes and rogues will never be enough…
Lifelong romantic Thaddeus Middleton is on the hunt for a wife. He hopes to find a woman more attracted to him than to money. Instead, he finds himself drawn to a spitfire who isn’t interested in him at all! At least, that’s what she says when she’s not kissing him beneath the stars...
Miss Priscilla Weatherby will inherit a fortune… provided she remains unwed and scandal-free. Easy enough, until she meets a man more dangerous than haughty lords and heartless rakes. Thad is a sweet, sexy delight, whose passionate embrace will ruin everything—including her! She’ll sacrifice anything for independence. Even love… 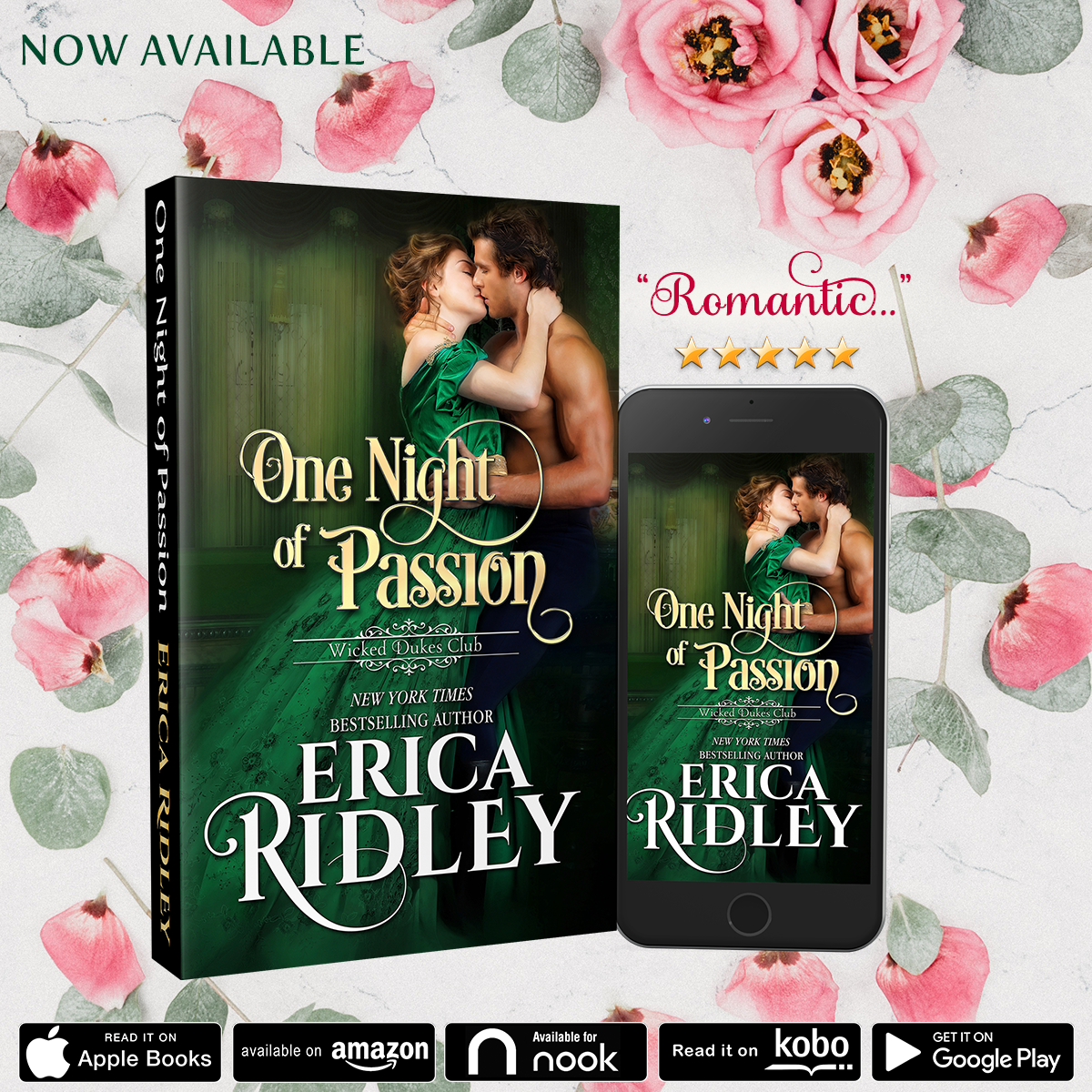 Earlier this year, Mr. Thaddeus Middleton had realized he’d been placing all his attention on the same pool of ladies. The outgoing ones, the flirtatious ones, the ones who had known him for so long that every one of his dances was promised within moments of stepping foot in a ballroom. Such evenings were fun, but got him no closer to his goal. Worse, he might have spent the past decade skipping over all the most interesting women. Thad had immediately declared this season the Year of the Wallflower. By dedicating at least half of each evening to ladies he’d never danced with before, he’d met countless new friends… and no potential brides. But just because there had been no fireworks so far didn’t mean he was on the wrong track. In fact, the season had barely begun, and he’d already witnessed two unlikely love matches. Didn’t fortune come in threes? He turned a slow circle, paying close attention to those in the margins. Although gentlemen carried no dance cards, Thad kept careful track. He still had a handful of unclaimed sets. Some young lady here tonight might be the one to spark the fireworks he sought. There. An excited tingle of anticipation rushed through him. Dark brown curls, gorgeous brown eyes, dusky pink lips, an enticing combination of soft skin and lush curves wrapped in a gauzy roses-and-cream evening gown. He knew her name: Miss Priscilla Weatherby. They had been formally presented during her come-out four or five years ago, but hadn’t spoken since. Although a reasonably familiar face at society gatherings, Miss Weatherby rarely stood up for more than a quadrille or two and tended to guard her company. As such, her name had never been linked to gossip—or bandied about much at all. She was almost as much a fixture as the gilded columns and crimson ropes partitioning the ballroom. Not today. He rolled back his shoulders in determination. After being on the shelf for five years, Miss Weatherby had likely tired of being overlooked by unimaginative lordlings. If she had never danced a waltz, why, Thad would be honored to be the first to ask. He strode in her direction with confidence and good cheer. Even if no spark marked the occasion, at least they would get a dance out of it, and possibly a few laughs. Miss Weatherby might well become the most memorable set of the entire night. When he reached the pilaster whose shadow half-concealed her from view, Thad swept a glorious bow. “How do you do this evening, Miss Weatherby? Dare I hope room remains on your card for a dance?” She gazed back at him with a fathomless expression. “Why?” He blinked. “Er, because this is a ballroom. For dancing. The food might be wretched, but the orchestra is lovely. Unfortunately, it is impossible to dance a quadrille by oneself, so I wondered—” “I know what dancing is,” she interrupted, her dark eyes locked on his with amusement and heat. “Why would you want to do it with me?” Thad moved closer with interest. Now that the conversation had taken such an unprecedented turn, he wasn’t certain he wished to waste a thirty-minute set marking out the steps of a quadrille. Conversing with Miss Weatherby would be leagues more diverting. “We needn’t dance,” he said at once, and gave her a full smile. “I’m happy to promenade, if you prefer.” There was no sense hiding how intrigued he’d just become. Thad did not believe in playing games. Part of being in the right place at the right time meant not ruining the moment by feigning indifference. She tilted her head. “Did I do something to make you think I’d be interested in perambulating about a ballroom on your elbow?” “Er,” Thad said brightly. “That is…” “Or did you come here because you judged me to be a wallflower, and therefore desperate for the attention of some impossibly handsome gentleman with courtly manners and a contagious smile?” Impossibly handsome and courtly manners sounded wildly complimentary. Thad suspected it was not. “Er,” he said again. “Only a fool would believe all wallflowers—” “Only a fool,” she interrupted, “would assume a woman not dancing must be heartbroken over a lack of suitors. Perhaps the woman received plenty of offers and simply said, ‘No.’ Just like this.” Miss Weatherby stepped away from the pilaster and into the light, her upturned chin and plump lips suddenly close to his own. “No.” With a flutter of eyelashes, she turned and walked off. Thad stared after her, thunderstruck. Their encounter had been more sledgehammer than spark, but one thing was certain: Only a fool would overlook a woman like Miss Weatherby.

Start the series of standalones today with One Night for Seduction!
Amazon: https://amzn.to/2Tz88rH
AppleBooks: https://apple.co/2GcA4ip
Amazon Worldwide: http://mybook.to/OneNightSeduction
Nook: http://bit.ly/2BoHAmc
Kobo: http://bit.ly/2DY4MJv
About Erica Ridley
Erica Ridley learned to read when she was three, which was about the same time she decided to be a writer when she grew up. Now, Erica is a New York Times and USA Today best-selling author of historical romance novels. The Dukes of War features roguish peers and dashing war heroes who return from battle only to be thrust into the splendor and madness of Regency England. In Rogues to Riches, Cinderella stories aren’t just for princesses… Lovable rogues sweep strong-willed young ladies into whirlwind adventure. The 12 Dukes of Christmas is a laugh-out-loud historical romance series of heartwarming Regency romps nestled in a picturesque snow-covered village. When not reading or writing romances, Erica can be found riding camels in Africa, zip-lining through rainforests in Costa Rica, or getting hopelessly lost in the middle of Budapest.

Connect with Erica
Facebook: http://bit.ly/2GgkG4f
Instagram: http://bit.ly/2SiFfDB
Twitter: http://bit.ly/2RN7t4f
YouTube: http://bit.ly/2GeskMP
Amazon: https://amzn.to/2GzXvkK
GoodReads: http://bit.ly/2WQDcVV
Website: https://www.ericaridley.com
Stay up to date with Erica by joining her mailing list: http://bit.ly/2Dnul5w
My Review
5 Stars
One Night of Passion by Erica Ridley is book Three in the Wicked Dukes Club Series. This is the story of Thaddeus 'Thad' Middleton and Priscilla Weatherby. I have read the previous books (and Loved them!) but feel you can make this a standalone book if you wish to do so.
Priscilla wants to be independent but also wants to go on adventures and travels with her father. Priscilla's father also took to traveling just has his father did. But she has to go through hoops that are in place to get that independence. Priscilla must attend at 3 weekly events, have no scandals, to not marry and when she turns 25 she will inherit the money she feels will help her goal of being independent and to travel.
Thad feels that its time to marry and goes forward to meet the women that is to be his..."The One". But the only person he is attracted to is Priscilla who is the opposite of what he thinks he wants in a wife and he sure that she can't be the one for him. Priscilla knows that Thad would be the perfect husband for her if she was looking for one and goes forward to turn him away and resist her feelings. When Thad is encouraged by his friends and family to looking further into getting to know Priscilla he start to become aware that she might just be what he always wanted.
Loved their story and this series!!!
ericaridley socialbutterflypr