Misadventures with a Rookie by Toni Aleo

Misadventures with a Rookie
by Toni Aleo, New York Times bestselling author
Release Date: April 10th Goodreads
#MisadventureswithaRookieRelease
Synopsis
Winning has always come naturally for stud ice hockey defenseman Gus “the Bus” Persson. On the ice or off, he’s never had any trouble scoring, racking up goals—and girls. As the best player in his rookie class and the number-one draft pick of the Malibu Suns, he’s taking his game to the next level and is justifiably full of swagger.
So why does one of the Suns’ ice girls treat him like he’s invisible?
Bo St. James doesn’t have time for rookie hotshots who think their gloves don’t stink. She knows them, she works with them, she trains them. It doesn’t matter that Gus Persson is the hottest newbie she’s ever seen. She knows his type. She’s got big plans of her own, and she’s not going to let some cocky rich kid athlete keep her from her goals.
But there’s a chemistry between them they cannot deny. A lust that burns so hot, it threatens to melt the very ice on which they make their livings. The game has changed for both of them. Together, can these two play to win? 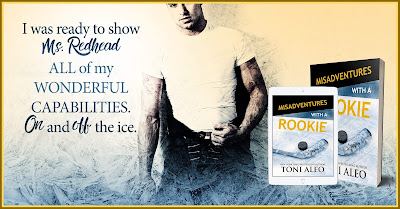 Buy Links
Amazon: http://amzn.to/2tp2KOo Nook: http://bit.ly/2DA0RE6 iBooks: http://apple.co/2tqLPdK Google Play: http://bit.ly/2tpEXhd Kobo: http://bit.ly/2smhduo
Meet The Author
My name is Toni Aleo, and I’m a #PredHead, #sherrio, #potterhead, and part of the #familybusiness!
I am also a wife to my amazing husband, mother of a gamer and a gymnast, and also a fur momma to Gaston el Papillion.

While my beautiful and amazing Shea Weber has been traded from my Predators, I’m still a huge fan. But when I’m not cheering for him, I’m hollering for the whole Nashville Predators since I’ll never give my heart to one player again.
When I’m not in the gym getting swole, I’m usually writing, trying to make my dreams a reality, or being a taxi for my kids.
I’m obsessed with Harry Potter, Supernatural, Disney, and anything that sparkles! I’m pretty sure I was Belle in a past life, and if I could be on any show, it would be Supernatural so I could hunt with Sam and Dean.
Also, I did mention I love hockey, right?
Connect on Facebook         Instagram           Twitter
Pinterest                Website
a Rafflecopter giveaway

My Review:
4 Stars
Misadventures with a Rookie by Toni Aleo is book 11 in the Misadventures series.  This is the story of Gus “the Bus” Persson and Bo St. James.  This is easily a standalone book
Gus is a rookie but did just get drafted with a NHL team called The Tornadoes but is temporarily on the Malibu Suns team...and this is where Gus meets Bo.
Bo is studying to be a sports therapist and as part of a internship she is working as a Ice Girl on the  Malibu Suns for about a year.  Bo knows that Rookies are always thinking girls like her are easy and she sees that in Gus.  Gus does have a reputation with the women and he has looks to back what he is offering but Bo is focused on her career.
Once they stop bickering and start seeing the other person as who they really are their relationship takes off.
Really enjoyed this book~
barenakedwords bnwauthorservices tonialeo1
Source: http://www.amazon.com/Misadventures-Rookie-Toni-Aleo-ebook/dp/B073FTDCN6/ref=sr_1_2?s=digital-text&ie=UTF8&qid=1523130445&sr=1-2&keywords=Misadventures+with+a+Rookie+by+Toni+Aleo