Misadventures of a College Girl by Lauren Rowe 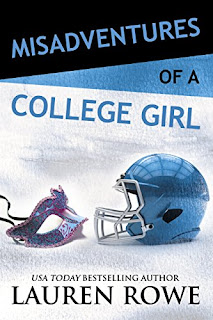 ***MISADVENTURES ARE STANDALONE ROMANCES THAT CAN BE READ IN ANY ORDER*** Synopsis
Straitlaced freshman Zooey Cartwright has arrived at UCLA determined to have a heck of a lot more fun in college than she did in high school. What’s the first item on Zooey’s agenda before classes start in two days? Losing her pesky V card. She’s definitely not looking for a boyfriend, so where can Zooey find the right guy to do the deed and move along without a backward glance? At a party thrown by a bunch of football players, of course. Enter Tyler Caldwell. A beast on the field and off, cocky as heck, and often wearing T-shirts with sayings like “God’s Gift to Womankind,” Tyler is most definitely not boyfriend material. After a make-out session with Tyler leaves Zooey entirely unsatisfied, she is determined never to see him again. But her schedule lands her in not one but two of his classes, and it doesn’t take long before Tyler and Zooey have reached an arrangement for Tyler to teach Zooey exactly what she wants to know―and a whole lot more she never bargained for. Can Zooey surrender her body to this bad boy without giving him her heart, too?
Buy the BookAmazon: http://amzn.to/2slNcLuBN.com: http://bit.ly/2gcAExG iBooks: http://apple.co/2tuH2Jg Google Play: http://bit.ly/2uoXYx2 Kobo: http://bit.ly/2turXamMeet the Author

Lauren Rowe is the pen name of the USA Today, Amazon #1, and international #1 best-selling author of The Club Series and more. She's a performer, audio book narrator, award-winning songwriter and media host/personality who decided to unleash her alter ego to write The Club Series to ensure she didn't hold back or self-censor in writing the story. Lauren Rowe lives in San Diego, California where she lives with her family, sings with her band, hosts a show, and writes at all hours of the night. Find out more about The Club Series and Lauren Rowe's other books at www.LaurenRoweBooks.com.Facebook            InstagramFind all books in the Misadventures Series here: The Misadventures Series
a Rafflecopter giveaway

Review:
5 StarsMisadventures of a College Girl by Lauren Rowe is book Nine in the "Misadventures" series.  This is the story of Zooey Cartwright and Tyler Caldwell.
This is a standalone book.
Zooey is 18 and off to college where she hopes to start experiencing a wilder life.  Zooey's mother died with she was around 2 years old and her father kept her very sheltered.  Now that she is on her own at college she want to get rid of her virginity so that she can start experiencing life.   Zooey thought that Tyler who is 21 and a start football player who doesn't do commitments would make the best choice for loosing it.  They had immediate attraction but when Tyler learned what she wanted he stopped and wanted her to think about what she was doing.  So she walked away from him but Tyler soon realized that maybe he was the one in the wrong.  Tyler as always kept it short with any girls always putting his Football future first but now with Zooey maybe he does have time for more.
Really Loved Their story!!~!