My Rogue, My Ruin 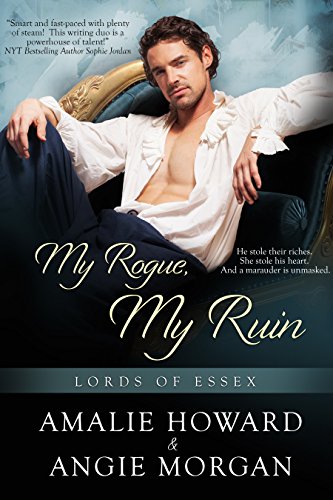 4.5 Rating
'My Rogue, My Ruin' by Amalie Howard is the story of  Archer Croft, The Marquess of Hawksfield and Lady Briannon "Brynn" Findlay.  This is my first book by Ms. Howard and I truly enjoyed it.  I am so glad to have found this author.  Archer and Brynn have been neighbors since they were both young and each played with the others sibling.  But Brynn was sick a lot with issues with her lungs so her parents were protective of her so they didn't see to much of each other later in life. But on Brynn's way home with her parents they are set upon by a bandit who is charming but takes their jewelry and money.  Brynn is very feisty with him tries to keep a necklace that her grandmother gave her.  This sparks some interest in her but he leaves her (and takes that necklace!).  Later she meets Archer at a party and she starts to think he might have been the bandit but then why would he be doing this?  Archer is attracted to Brynn but thinks very poorly of the town due to his childhood with his father and how his sister is treated by the town.  His father doesn't even claim her.  So Archer is harden somewhat to the town but does try to to help the poor.  I truly liked how Brynn wasn't letting her family slow her down in what she wanted to do.  I also liked Archer a lot and how he was fighting he feelings.  The secondary characters were some of the best I have read!  I truly hope we will be reading their stories too!
"My honest review is for a special copy I voluntarily read."
https://www.amazon.com/gp/profile/A2HX0B5ELOPP5Z?ie=UTF8&ref_=sv_ys_3
https://www.facebook.com/sally.mae.395454
https://www.facebook.com/groups/1709181636033417/
http://sissymaereads.blogspot.com/
https://romancebookreviewforyou.wordpress.com/
http://booklikes.com/
http://romancebookreviewforyoublog.tumblr.com/