Dueling With the Duke 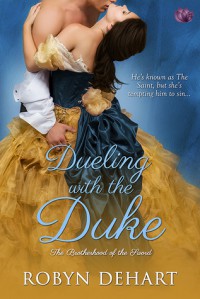 I received an eARC, from NetGalley and the publisher, in exchange for an honest review.
'Dueling With the Duke ' by Robyn DeHart is book two in the "Brotherhood of the Sword" series. I have read book one 'Undercover with the Earl' but I thought this was easily a standalone book.

Lilith Crisp, Lady Thornton, was her father's ticket to 'selling' her to the highest bidder when it came to marring her off about 6 years ago. Lilith knew there wasn't much she could do to change her future. At a ball she meet Gabriel Campbell who at the time was not the Duke of Lynford but his older brother was. Lilith meet both Gabriel and his older brother. Lilith was drawn to Gabriel but it would seem it was not to be as she didn't really see him any more after that night. But his older brother did and along with Lord Thornton...but fraught for her 'hand'.

Now about six years later, Gabriel is the Duke of Lynford after his brother died in a duel fighting with Lilith future husband all those years ago. Lilith was just trying to survive through her Marriage that of late was getting so that she started to save money because she knew her husband was into something really bad and wanted to be prepared to leave if something did happen. Which it did... She had heard her husband had been killed. So she quickly started to gather her money and go after her husband's 'niece' that Lilith felt like a sister toward her.

Gabriel Campbell is working for the Crown and is the one to find Lilith husband dead. But when they go to move the body it appears to be someone else. With all this mystery going on he goes to meet Lilith again after all these years to see what she knows. Gabriel sees her slipping out the window of her house and he follows her to see what she is doing. Gabriel thinks now more than every that Lilith knows something of what is going on and plans to find out what.

Can Lilith protect her Niece by marriage? Can Lilith Fight these feeling she still has for Gabriel? Can Gabriel get past what happened to his brother...can he fight his growing feelings for Lilith?